I do alot of hand work...sewing, crocheting, etc, while sitting in my comfy recliner as I watch TV.  Multitasking, you know ;)  But I don't know how many times that I have dropped my scissors, thread, crochet needle and such and then they slip down the side of the cushion and down into the bottom of the recliner!!  Which means I have to get up, turn the recliner over and try to dig out my lost items.  Not fun. 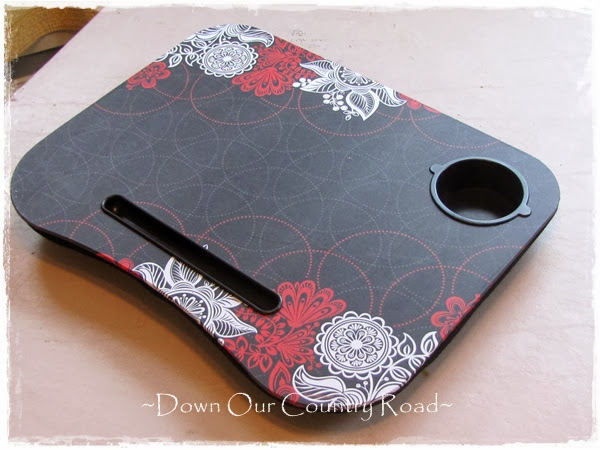 I thought a lap tray would work but everything would still roll or slip off the tray.  I came across some crafting trays at the fabric store but the designs they had in stock just didn't appeal to me.  Everything was for either children or teeny boppers. Bummer.  Finally, it dawned on me.  Get one and give it a makeover!! 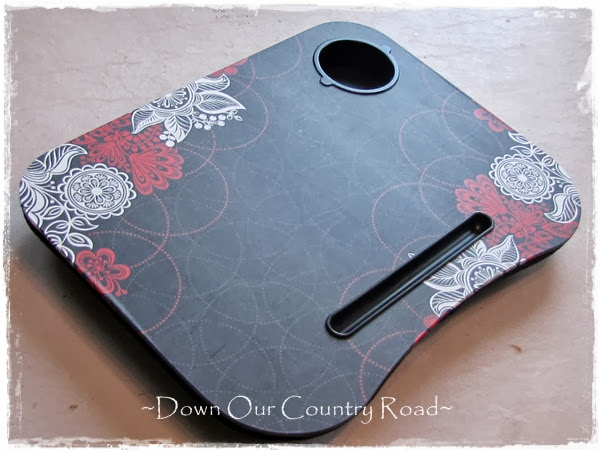 I found this one at HL.  Truth be told, there is absolutely nothing about the design that I find appealing.  It's just not my style.  The only good thing it had going were the cup and pencil holders.  Perfect for holding those little items that slip out of my hands and fall down into the cushions! 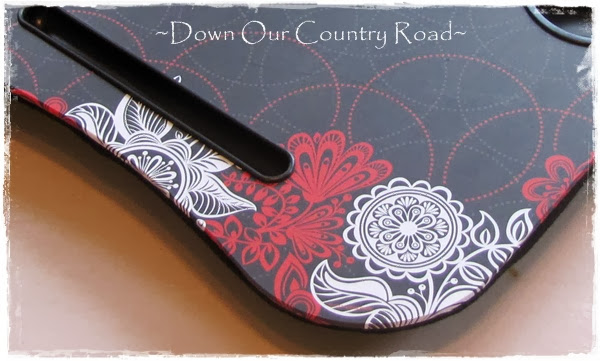 But I had to do something about these colors... 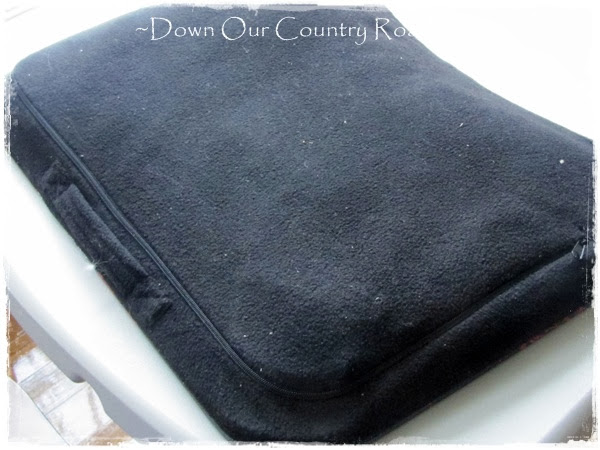 And definitely this backing!  A velour type fabric means only one thing...it will attract threads and bits of fabric like nobody's business.  Not good.  There is a carrying handle and a zippered opening for replacing or adding more of those little styrofoam beads if one was so inclined but those aren't on my 'must-have' list. 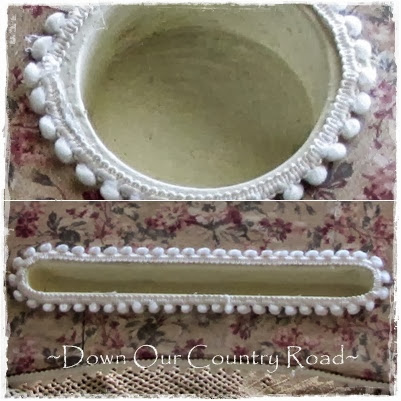 First thing to do was repaint the cup and pen holders.  I used my craft paint but it wasn't sticking very well and scratched off very easily.  So I scraped it off and mixed the paint with some Mod Podge glue.  That seemed to do the trick. 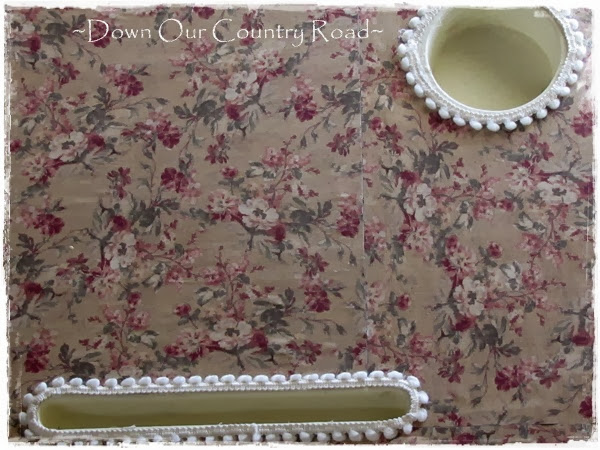 I dug through my stash of scrapbook paper and found some that looked rather feminine.  Using the Mod Podge glue again, I adhered it to the top of the tray but it created too many bubbles so off it came.  Next attempt was with spray adhesive.  Much better.  The hard part was piecing the paper sheets together and cutting around the holders. I let it dry overnight and used an exacto knife for trimming but still did a rather sloppy job of it.  What does any smart crafter do?  You cover it up!!  Before applying the mini pompom trim, I sealed the scrapbook paper with a layer of Mod Podge as I was afraid the paper would tear easily.  I started freaking out when it started bubbling again but was able to work them out once it started drying.  Whew! 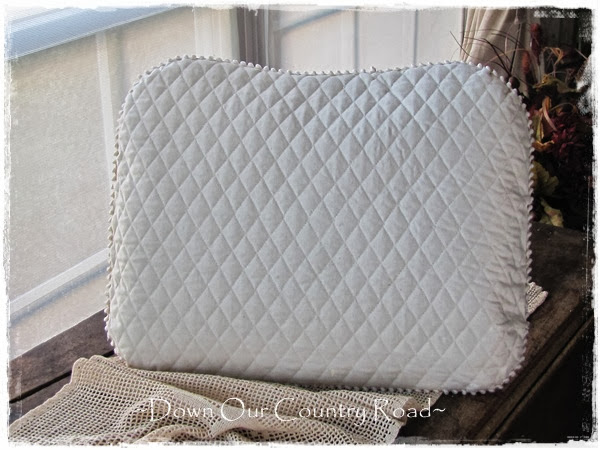 For the back, I purchased this quilted fabric in an ivory color.  I turned the tray upside down, laid the fabric over it and just did some freehand cutting.  I saw no need to take off the black velour.  Using my hot glue gun, I worked my way around the tray adhering the fabric along the edges leaving the rounded corners for last.  Then I just scrunched up a little bit at a time and glued some more.  It wasn't too tricky and didn't have to be perfect because of the soft bottom. 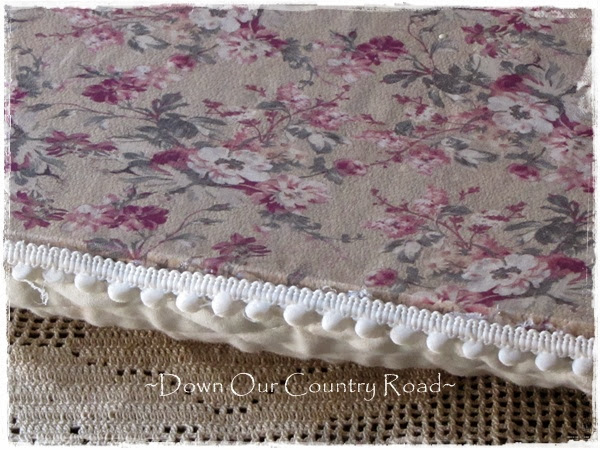 I used some more of the pompom trim to cover up the raw edges of the fabric.  I started at the bottom middle (area closest to me) and just overlapped it a bit so that it didn't show too much.  All of the trim was applied using the hot glue gun. 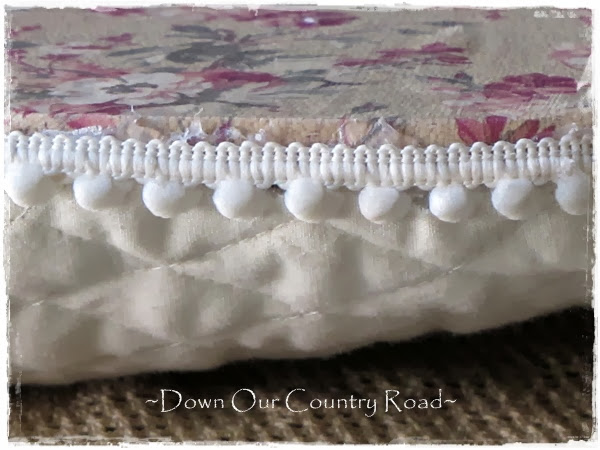 Don't look too closely at the sloppy job I did with the glue gun. :/ 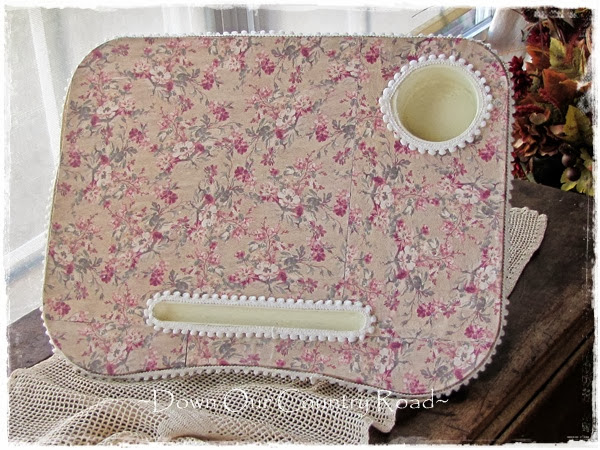 So there you have it!  My not so appealing crafting lap tray is now something pretty to use while I'm working.  Much better, don't you think? 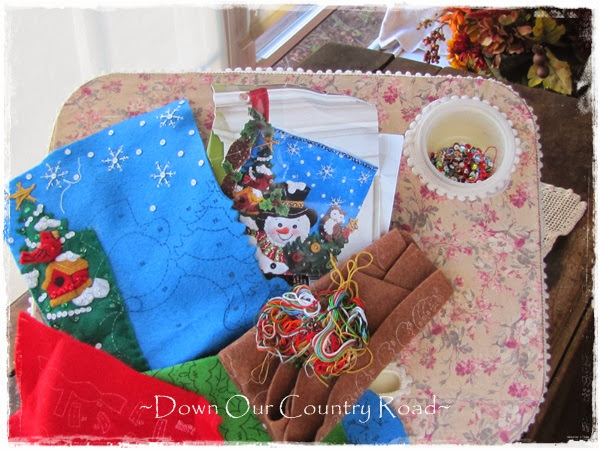 Now it's time to get to work on some projects...maybe this one?
Until next time ~

You'll find me at these parties....
Dwellings...Amaze Me Monday
Between Naps on the Porch...Metamorphosis Monday
The Dedicated House....Make It Pretty Monday
Stone Gable....Tutorials, Tips and Tidbits

Velma, what a clever idea. It really has a sweet look now. Good job..Happy Monday..Judy

Much better! Great idea to have the cup holder to corral all those little bits and pieces:>)

I didn't even know they made crafting trays. Now I want one and I want to redo it just like you did...lol...great job!!

Sounds like a lot of work but well worth it. You did a great job! I might be looking for one of those too.

You are brilliant, Velma! I think I could do my handwork better if I had a pretty one of those, too!
Happy crafting!

Hi Velma
That was a great idea to do a remake of that tray, bet it works great for you and now you like it too. You did a very nice job on it.

Oh now that's so much better looking and more efficient. I have that problem of losing my stuff down the sofa too... lol. Now, does it match your recliner :)

Velma...I love it! I'm a TV crafter too. I love to multi-task. Those colors are perfect!

Velma,
I love the make-over! I never would have thought about doing such a thing.... you always inspire me :)

Have a great week!

Beautiful! Lots of people would love to have lap desks just like yours! 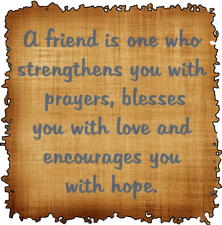 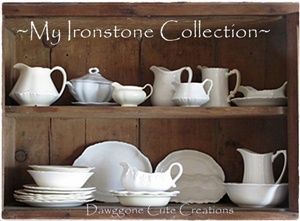 I'd Love to Have You Join Us 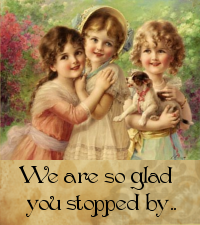 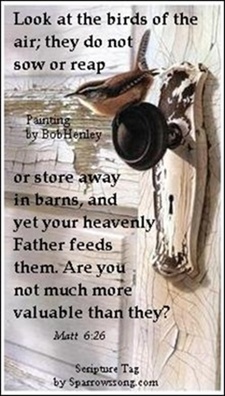 Some of My Favorite Blogs....

❁Velma ~Down Our Country Road❁
Well, hello! I'm so glad you found your way Down Our Country Road. I hope you can stay and visit for a while. I'd love to share with you some of my sewing projects; cook up a recipe or two; maybe about a book I am reading; some of our RV adventures; taking pictures and scrapbooking; talk about things that I love to collect, vintage finds, antiques and decorating. And I can't forget my family and grandchildren, the greatest blessings in my life, and my Savior, the Love and Light of my life! Of course, I'd love to hear and see what you have to share, but if you can't stay for a visit, could you at least drop me a note and say hello? I'd love to hear from you.